Hurricane Watches Issued for Portions of the Leeward Islands

Hurricane watches have been issued for Antigua, Barbuda, Anguilla, Montserrat, St. Kitts and Nevis as Hurricane Irma continues to bear down on the Caribbean, and preparations continued in the U.S Virgin Islands with sand bag distribution.

A hurricane watch means that hurricane conditions – sustained winds of 74 mph or higher are possible within the specified area in the next 48 hours.

A NOAA Hurricane Hunter aircraft flew into Hurricane Irma Sunday, recording surface winds close to 100 knots (nautical miles per hour) and conditions that are likely to strengthen the over the next day or two, according to the NHC. Based on center fixes from the Hurricane Hunters, Irma has been moving a little south of west. A strong high pressure ridge over the central Atlantic should steer Irma on a west-southward to westward course over the next couple of days. 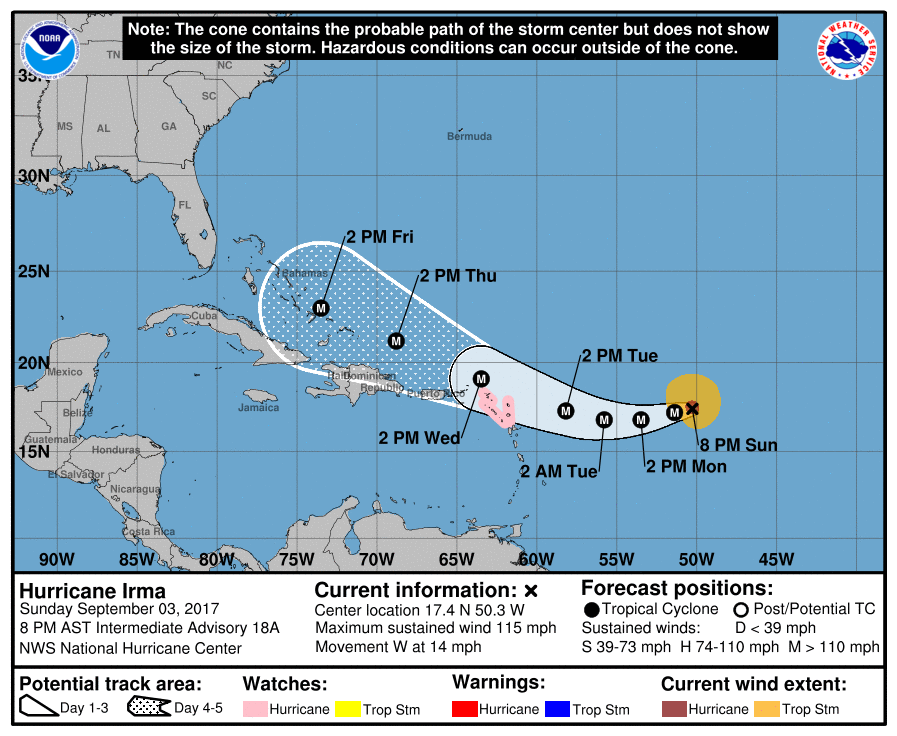 The V.I. Department of Public Works has begun distributing sand bags at the following locations from 9 a.m. to 3 p.m.:

According to the National Hurricane Center, Irma is a category 3 storm. It has continued on a westward to west-southwestward path across the Atlantic Ocean, with sustained winds of 115 miles per hour.

Some strengthening is forecast during the next 48 hours.

The government of France issued a Hurricane Watch for St. Martin and St. Barthelemy.

“Interests in the remainder of the Leeward Islands, the British and U.S. Virgin Islands, and Puerto Rico should monitor the progress of Irma,” the NHC cautioned.

As of 5 p.m. Sunday the center of Hurricane Irma was located near latitude 17.6 north, longitude 49.8 West. Irma is moving toward the west near 14 mph. A westward to west-southwestward motion with some reduction in forward speed is expected through Monday night. On the forecast track, the center of Irma is forecast to approach the northern Leeward Islands late Tuesday.

The National Weather Service at San Juan advised that much of the guidance indicates Irma has turned slightly westward to west-southwestward. Marine conditions will continue to deteriorate by early next week. Seas will be dangerous with waves 30 feet or greater offshore and 15 to 20 feet on the northern coasts of St. Thomas and St. John. As it currently stands, most of the impact is expected to be north of St. Thomas and St. John, causing storm and hurricane conditions throughout the territory, according to the NWS.

VITEMA Director, Mona Barnes is encouraging the community to continue to remain vigilant and to monitor weather reports on Hurricane Irma. In the event the U.S. Virgin Islands is placed under a hurricane watch or warning, she advised the community to be ready, be prepared and be safe.

“Don’t wait for a hurricane watch or warning to prepare. Make a checklist of necessary pre-hurricane preparations and review them with your family. Stock emergency kits with items such as water, medicines, flashlights, radios, food, batteries, cash and copies of your critical information. Your plans should also include family members with access and functional needs, and pets,” Barnes said.

“Stay informed about the weather using credible sources of information. As a territory, we will continue to do our very best to ensure we are prepared to protect the people of the Virgin Islands,” Barnes stated.

Information on how to prepare is online at www.Ready.gov. Those who want up-to-the-moment information can register for instant alerts from the National Weather Service and VITEMA at www.VIAlert.gov.

Senator Questions Overuse of Exempt Employees at Property and Procurement

Virgin Islander, Keo L. Brown, a Coast Guard Operational Specialist Technician stationed aboard the U.S. Coast Guard Cutter James received an Achievement Award for superior performance from July 2019 to July 2022. According to a release from the Coast Guard, Todd D. Vance, the cutter’s Commanding Officer, recognized Petty Officer Brown for his accomplishments last month when the vessel was docked in the port of Charleston, South Carolina. Petty Officer Brown’s commendable achievements include a demonstration of his exceptional knowledge in singlehandedly rebuilding the cutter’s communications suite while underway at sea, thus maintaining the National Security Cutter’s ability to remain on mission while deployed to the Eastern Pacific Ocean and the Caribbean Sea. In the Fall of 2021, Petty Officer Brown also developed a robust command and control training curriculum for the cutter’s first counter-narcotics patrol.