Bill Kossler - September 26, 2019
A portion of the former Hovensa refinery on St. Croix is on schedule to resume refining oil by year's end, according to Limetree Bay Ventures, parent company of Limetree Bay Terminals and Limetree Bay Refining. 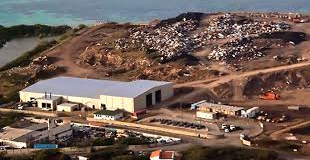 Judi Shimel - September 18, 2019
Several days after it was revealed in a federal courtroom, a local government official acknowledged that steps were underway to establish a new landfill site on St. Croix.

Judi Shimel - September 2, 2019
How well workers at the Waste Management Authority have done with taking over operations of two wastewater treatment plants came under the scrutiny of a federal judge on Friday.

Susan Ellis - July 25, 2019
Around 25 people attended a Tuesday town hall meeting hosted by the U. S. Environmental Protection Agency at the Florence Williams Library in Christiansted in order to hear comments about the V.I. taking responsibility for its solid waste landfills.

Susan Ellis - June 23, 2019
Environmental Protection Agency officials from New York and Puerto Rico visited the U.S. Virgin Islands last week and met with local officials and members of the media at the FEMA office to confirm the agency’s support in protecting the territory's public water, landfills and air quality.

Source staff - May 23, 2019
The V.I. Water and Power Authority continues to be in compliance with emissions consent decrees, earning praise from U.S. District Judge Curtis Gomez during a quarterly court review Monday. WAPA will only need to have annual reviews going forward, according to a statement from the authority.