When it comes to the economy, the biggest loser in the 2017 hurricane season may well have been the U.S. Virgin Islands. That’s because its dependence on tourism as almost a sole source of income makes the territory extremely vulnerable to natural disasters.

A report recently published by the Federal Reserve Bank of New York concludes not only that the V.I. endured an economic blow similar to if not worse than Puerto Rico, but that it has been slower to recover from it.

Titled “Puerto Rico and the US Virgin Islands in the Aftermath of Hurricanes Irma and Maria,” the 20-page report was written by Jason Bram, officer research economist. It is dated June 20, 2018, and bears a caveat that any opinions it expresses are those of the presenter and not necessarily those of the Federal Reserve Bank of New York or of the Federal Reserve System.

Bram notes that the hurricanes had devastating affects in the form of lives lost, human suffering and damage and loss of property, but the focus of the report is the long-range economic impact.

As has been pointed out in many forums in the months following the back-to-back major hurricanes, both U.S. Caribbean territories were in financial distress before the storms hit.

Bram says Puerto Rico’s slide started in 2006, and the V.I.’s “a few years later.” By 2016, Puerto Rico’s public debt was roughly 100 percent of its GNP – gross national product, or the total value of the goods it produced. That same year Congress created a fiscal oversight board and a bankruptcy-like process to try to shore up the commonwealth.

Bad as the employment rates were, they paled by comparison to the sudden job loss resulting from the September 2017 hurricanes.

According to the report, Hurricane Maria left Puerto Rico with an additional drop in employment of 5.8 percent.

The Virgin Islands, which was devastated by both Irma and Maria, lost 11.7 percent of the jobs it had immediately before the storms.

The only disaster listed that caused more job loss was Hurricane Katrina in August 2005, with the listed rate of -29.7 percent.

And the sheer numbers may not tell the whole story. The report notes that some of the people who are still employed may likely have suffered a decrease in income. This is especially true of tipped workers in the tourism industry. There may also be “additional unmeasured effects on the informal economy.” Presumably, that is a reference to the numbers of self-employed workers such as vendors and transportation service-providers that tend to exist in the tourism industry.

The report does not reference such usual economic indicators as the numbers of cruise ship visits, air arrivals or gross receipts or sales tax revenues.

The report suggests that some redesign and investment in electrical and water infrastructure in both island territories will have “sizable potential benefits.”

Puerto Rico has shown “signs of resilience” while the Virgin Islands “has been slower to recover … “largely due to its dependence on tourism,” according to the report. Recovery in the former “will likely be effected by the degree of out-migration, external aid, fiscal and other reforms,” but in the V.I. recovery will be affected “by how well the tourism infrastructure is restored and how quickly visitors return.”

The full report can be seen online here. 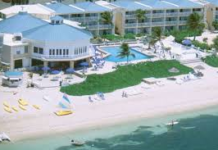