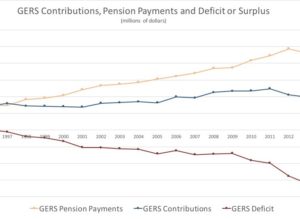 The pension plan is massively underfunded due largely to decades of paying retirees much more than it collected from employees. It has been in crisis since at least 1998 when it first began spending much more than it took in.

In October 2019, GERS Executive Director Austin Nibbs projected the pension system will exhaust its trust fund completely and cease being able to pay full monthly benefits by 2023. That default date may come sooner if the investment markets take a downturn, he said. As of October, 8,685 V.I. retirees were collecting retirement checks from the system.

“While we await the Senate’s approval of other proposals I have made to shore up the Government Employees’ Retirement System, the Bryan/Roach administration will continue to find all possible plans to keep this vital system solvent,” Bryan said in a statement Tuesday.

The task force will consist of 12 members – including a member selected by the Delegate to Congress; two members chosen by the Senate president; one member who is a retired government employee; and one government employee with less than 8 years’ experience and who is 35 or younger – who will act as advisors to Governor Bryan and will meet monthly and continuously until their mission is accomplished.

“I look forward to the recommendations of a task force of financial, business, tax and real estate experts, along with other experts from the private sector who will focus on the crisis facing the pension system for current and retired government workers,” Bryan said.

The Advisory GERS Funding Task Force is charged with:
– Exploring options for a short-term bailout or temporary options and more permanent restructuring of the retirement system that incorporates and applies to current and future retirees.
– Exploring the amendment of the current GERS law and proposing recommendations for drafting new GERS provisions within the GERS Funding Plan.
– Developing funding measures for payment of GERS obligations and the elimination of future obligations.
– Creating and preparing the GERS Funding Plan for presentation to the governor.

Task force members will not be compensated for their participation. Once all 12 are appointed by the governor, the group will have four months to present an initial GERS funding plan.

The Senate, then deeply hostile to the outgoing governor, declined to act on it. It was not clear at that time if those reforms would have been sufficient to prevent the crash altogether, but they would have delayed and softened the landing.

Bryan’s predecessor, Gov. Kenneth Mapp, promised in his 2015 State of the Territory Address, “This year, one of my administration’s top priorities will be the challenges plaguing the Government Employees’ Retirement System.” Mapp proposed several reforms, although when the Senate passed modest reforms in 2015 it removed the most significant part – removing the cap on contributions at the $65,000 income level – at Mapp’s request, on the grounds that the government could not afford the increased contributions.

(For a detailed look at how the pension plan got to its current state, see: GERS Collapse Will Come, Retirees Better Start Planning)

The Senate has since approved several small reforms, from Mapp and its members, allowing the GERS governing board to increase employee contributions by three percent in 2015 and again in 2020 and 2021. It has also devoted funds from an oil well to the system. And it approved legislation from Bryan that would devote a portion of taxes from legalized cannabis to the system, although the system to sell cannabis is not running yet. Cannabis taxes could generate several million per year for the system.

The system is losing more than $70 million every year, so measures that generate less than that amount may only slightly delay the inevitable collapse. But every additional dollar will lessen the severity of cuts pensioners will soon face.

📸 (Image): African Liberation Day will be celebrated at the V.I. Capitol on May 25. (Submitted#visource
#TheSourcee#stcroixr#stthomasi#stjohno#usviS#usvirginislandsi#newss#caribbeans#CaribbeanNewsa#saintcroix #saintthomas##saintjohns#stti#STJh#STXT#LocalNewsX#africanliberationa#diasporao#africanliberationdayiberationDay