The V.I. Police Department on Thursday arrested 33-year-old Pernell Adulphus Towers Jr., also known as Pete, charging him in the March 20 killing of Kelvin Woodson and assault of another individual in Christiansted.

Police said the charges stem from the March 20 shooting death of Kelvin Woodson and the assault of another individual in the vicinity of Harmony Grocery and Bar in the Watergut, Christiansted.

The report of the incident said that around 10:19 p.m., the 911 center received reports of shots fired, then moments later reports of a man down. At the scene, officers found one male individual, later identified as Woodson, with multiple gunshot wounds about the body.

Witnesses told police there had been an argument inside of Harmony Groceries between the suspect – who was not identified at the time by police – and the victim. The suspect pulled out a gun and shot him numerous times about the body.

A concerned citizen tried to stop the assailant and was grazed by a bullet.

Woodson died of his injuries sustained from the gunshots. 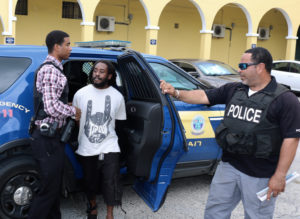 The report of Thursday’s arrest gave no details of how or where Towers was apprehended, but Lt. Naomi Joseph, commander of the VIPD’s Criminal Investigation Bureau, said it would not have been possible without the collaboration between law enforcement and the community.

“We thank the community for their assistance in this case,” the police report said.

The universality of Dr. Martin Luther King, Jr.’s work was not lost on the eight students who spoke to the Hebrew Congregation of St. Thomas Friday night about their hopes for steering our community toward a path of tolerance, equitable communication, acceptance, and change. #visource #usvi ... See MoreSee Less