Medical cannabis survived what Senate President Myron Jackson called its “day of reckoning” when, in what Sen Positive T.A. Nelson called “a historic” vote, the V.I. Senate approved by a 9-4 vote his Medical Cannabis Patient Care Act, a bill that would shift the landscape of local marijuana laws in the Virgin Islands.

“It is historic for the Virgin Islands. Medical cannabis is on its way,” said Nelson right after the vote. “I still don’t know how to feel, you know, I’ve taken such a whooping. In a few hours, I know I’m going to feel great and I think – I know we made the right step.”

The medical cannabis bill would legalize and regulate medicinal cannabis for adult use in the territory, allowing the cultivation, processing and dispensing of medicinal marijuana products. It would protect patients with medical conditions specified in the legislation, along with their physicians and primary caregivers, from arrest and criminal prosecution. It would also regulate and protect ancillary industries surrounding the medical marijuana industry, including processing, packaging, labeling and distribution.

An emotional Nelson was visibly pleased, whistling and laughing with colleagues after the vote that divided a Senate clearly leaning toward legalization. Nelson also acknowledged Barbara LaRonde of USVI NORML, who sat in Senate chambers all day, hopeful that the last senate session of the 32nd Legislature would mark the end of the 10-year fight to legalize medical cannabis.

“There’s so many emotions bubbling inside,” said LaRonde after the vote. “I want to jump with joy. I’m thinking, ‘What’s the next step?’ It’s been a long trial to finally get to this stage.” 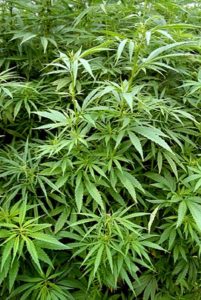 LaRonde has been lobbying the Legislature and educating the community about marijuana legalization for 10 years, returning in June after leaving the territory for two years to get involved with the medical marijuana industry in California and speaking to lawmakers in Jamaica. As for her next steps, LaRonde said she will continue to consult with lawmakers and regulatory agencies, and eventually explore the possibility of allowing cannabis for sacramental use.

“We do have a population of Rastafarians who have kept this tradition alive … and they should also be given the legal right to consume it in that fashion,” said LaRonde.

The legislation also regulates the cultivation side of the medical marijuana industry, allowing licensees to grow as many as 1,000 plants, the largest allowable number under the legislation. Local farms would get $500 fee discounts for each of the license levels. To prevent monopolies, cultivators cannot also own dispensaries.

Nelson said medical marijuana products, like prescription medications, also merit regulation to prevent them from leaking to the non-cardholder population. He also believes it can transform the local illegal cannabis market, and may provide legitimate business opportunities for illicit retailers of marijuana.

The shortened debate time for the medical cannabis block failed to suppress the bitter divide between supporters of the bill, and those strongly opposed to it. Four lawmakers held their ground in opposition, including O’Reilly, who made a last impassioned plea.

“The train has left the station, and it’s going to hell, and I’m not getting on it,” said O’Reilly in a jab at her colleagues’ frequent use of the phrase meant to characterize the Virgin Islands as trailing in the national movement toward legalization.

O’Reilly reiterated her objections: the fact that the Organic Act prohibits the Legislature from passing any law that contradicts federal law (which still lists cannabis as a schedule one drug), her claims that, one, the substance is indeed addictive despite LaRonde’s assertions to the contrary, and two, it can destroy the minds of young people.

“This bill legalizes the bill not only for medicinal use but also for recreational,” O’Reilly claimed. “This is an excuse for adults to smoke and to do it freely, and that’s fine, but you have to live with the consequences.”

O’Reilly also echoed Francis’ assertion that the bill only allows the Office of Cannabis Regulation, not the V.I. Police Department, to raid dispensaries in case of illegal activity. Nelson later said that assertion is incorrect, saying the OCR will contact regular law enforcement in case of any violations of provisions of the bill. The legislation, he said, does not prohibit police from raiding any illegal activity.

James, meanwhile, said the territory does not have sufficient population for medical cannabis and the bill does not pass economic muster, a sentiment echoed by Vialet.

While Nelson acknowledged the bill is not perfect, he says the 33rd Legislature will have the opportunity to iron out the wrinkles and the Office of Cannabis Regulation will have authority on implementation and enforcement.

The Medical Cannabis Patient Care Act will be sent to the governor. If he vetos the bill, the Senate will need 10 votes to override the veto and ultimately turn the bill into law. Nelson, however, said he has spoken earlier in the process to Mapp, who said “he would sign a bill that makes sense.”

“The governor and I, we don’t see eye to eye on many things, but it’s a good mark to leave on the way out,” said Nelson.

Atlantic Storms Currently No Threat to Territory, According to Officials