Sen. Steven Payne held a meeting last week to discuss the community’s preparation following Hurricane Dorian’s brush with the Virgin Islands on August 28. When Payne learned that the generator located in the cafeteria of the Julius E. Sprauve School was not functioning, he vowed to do something about it.

Payne sent out a call for volunteers, “and the men of the community replied, ‘We’re in!’” Payne said. On Sunday morning, they removed a generator that hasn’t worked in years and replaced it with a functioning backup 72KW generator that was on the premises.

“It’s morale boosting because things are finally getting done,” said Abigail Hendricks of St. John’s Department of Human Services. Hendricks normally directs programs for senior citizens on the island, but in the event of a major storm, she’s in charge of mass feeding and sheltering. The newly installed generator will make the cafeteria fully functional if power is lost because of a storm.

“I’m thankful for Sen. Payne and for Dionne Wells-Hedrington,” Hendricks said. Wells-Hedrington, who is the chief director of operations for the Department of Education, served as the principal of the Sprauve School for several years. 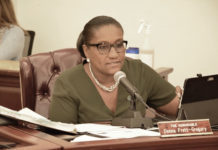 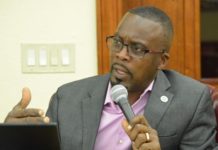