According to court records, on Sept. 24, 2018, Sweeney provided Shahime Ludvig Jr. with 22.78 kilos of cocaine at the Cyril E. King Airport and a plane ticket to Atlanta. The cocaine was packaged as 20 individualized bricks and placed in a checked bag. Once in Atlanta, the coconspirator was to deliver the cocaine to another member of the cocaine conspiracy.

On the day of travel, Sweeney’s co-conspirator entered the Cyril E. King Airport and checked the bag for the flight, according to court records. During a routine screening, a specially trained narcotics detection canine “alerted” on the bag. Customs and Border Protection officers in St. Thomas opened the bag and discovered the cocaine. Homeland Security Investigations arrested Ludvig prior to him boarding the flight. Ludvig entered a guilty plea in federal court in 2018.

Under federal law, Sweeney faces a minimum sentence of 10 years in prison and a maximum fine of $10 million.

This case was investigated by Homeland Security Investigations. It is being prosecuted by Assistant U.S. Attorney Everard E. Potter. 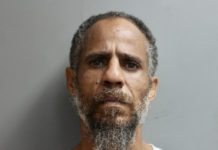