“Sweet as Sin: The Unwrapped Story of How Candy Became America’s Favorite Pleasure” by Susan Benjamin

The last meal you had was very satisfying. Everything was made the way you like it, served efficiently and pleasing to your palate.

What you ate was delicious and it almost filled you up, leaving just enough room for one more bite – and in “Sweet as Sin” by Susan Benjamin, you’ll read about that which you might’ve chosen.

Benjamin’s mother hated candy – which was unfortunate, since Benjamin’s father loved the stuff. As a child, Benjamin sided with her father and now it’s her livelihood: she’s a candy saleswoman and historian who says that while sweet treats have been around for millennia – paleontologists once found 9,000-year-old ABC gum – the history of candy is “a convergence of many cultures and experiences…”

Native Americans, for instance, knew all about sweets long before Europeans arrived. They found that corn and maple syrup, properly processed, made dandy candy and that fruit, as Benjamin’s brother says, “is pretty much the same as candy.” Europeans expounded on those ideas and learned to make root beer.

As humans cultivated sharper cravings, the world leaped to satisfy them: from a French slave, we got cheaper vanilla; from Mesoamericans, we got chocolate, and both were once considered aphrodisiacs.

Asia gave the world marshmallow. The peanut, it’s believed, came from Africa. Sugar cane, says Benjamin, began in India and was at least partly the reason slaves were brought to U.S. shores.

Though cacao was “most likely” used by Southwestern Native Americans, chocolate wasn’t popular with Colonists until the late 1600s – and even then, it was a drink, not a food.

It took a surprisingly long time for it to become a treat but, once it did, businesses sprung up to make it, soldiers demanded it, and candy stores sold it. The first commercial candy seller, by the way, was quite involved with the Underground Railroad.

And your favorites? Many of them are here in this book, with stories that’ll tickle your sweet tooth: find out what the Sugar Daddy was originally named. See why Life Savers were created, why they’re called Milk Duds, which candy was the first in space, and what made Milton Hershey cry.

Oh, my, reading “Sweet as Sin” is like taking a trip back to your childhood, with history along for the ride. It’s nostalgic, but informative. Bite-sized, in both memory and fact, and as easy to dip into as your grandma’s candy dish.

With the lightest of tones and a sprinkle of the personal, Benjamin shows how candy has become a part of our culture, and how it’s stayed there despite a recently bad reputation that’s somewhat changing.

In doing so, she serves up a Baby Boomer’s treasure trove of old favorites and treats you may have forgotten you enjoyed (candy cigarette, anyone?) wrapped inside pictures and little-known stories.

Oh and did I mention recipes?

Yep, you’ll find some of those too and plenty to chew on, making a great read for foodies and former kids alike. So look for “Sweet as Sin.” It’s pretty tasty. 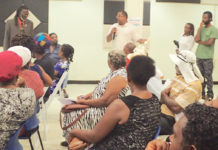