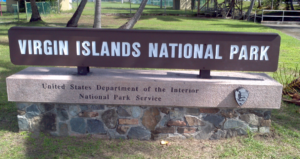 It’s been just over a week since officials at the National Park Service announced a shift in its Caribbean operations. Now, a new park superintendent is expected to introduce himself at a Thursday meeting on St. John. While some have expressed concern this represents a loss of local control, according to Delegate to Congress Stacey Plaskett (D-VI) and a statement from the National Park Service, the shift leaves local control unaffected, but has St. Croix, St. John and San Juan park superintendent reporting to the Caribbean Parks Superintendent instead of a more distant regional director.

Superintendent Randy Lavasseur on Tuesday told the VI Source he received his new title, Caribbean Parks Superintendent, July 11 from NPS Atlanta Regional Director Stanley Austin. A recent arrival to Puerto Rico from San Francisco in 2016, Lavasseur is a former chief ranger at the Golden Gate National Recreation Area. When he comes to meet the public at the Cruz Bay Legislature, Lavasseur says he will describe a task set before him by NPS officials. It’s a task he describes as an immediate realignment. “They’ve given us 60 days to come up with a design,” he said.

Lavasseur said the new organization is expected to create that design based on three priorities — collaboration, safety, and community engagement. The results of the collaboration between the Caribbean parks superintendent and three deputy superintendents is expected in the regional office within that time frame.

The newly appointed Caribbean superintendent said other park systems are currently undergoing similar realignments. The one he mentioned was the Outer Banks of North Carolina.The three deputies tasked with helping to shape the new park system are Jane Schaeffer on St. John, Joel Tutein on St. Croix and Feliz Lopez in Puerto Rico. “Myself and the other deputy superintendents will get together to decide what our vision of success will be,” Lavasseur said.

This arrangement, according to a third-hand account, appeared to come as a surprise to at least one of the three people named. According to the head of the non-profit Friends of the Virgin Islands National Park, Schaeffer was off-island as the transition began.

Schaeffer took over the administration for VINP and the St. John Underwater Monument in December upon the retirement of former parks superintendent Brion Fitzgerald.

When Friends Director Joe Kessler spoke to Schaeffer Sunday, he said, she did not know about the Thursday public meeting. “Nobody at the park seems to know anything about this,” Kessler said Tuesday. The St. John based non-profit has been instrumental in raising funds to help the Virgin Islands National Park cover some operational costs in the face of federal budget cuts. When asked how significant a reorganization of park authority between the Virgin Islands and Puerto Rico is, Kessler said, “It’s huge.”

Also apparently left in the dark about the shift in park authority was Delegate to Congress Stacey Plaskett. Because U.S. Insular territories like the Virgin Islands are managed by the Department of the Interior, delegates have frequent dialogue with Interior officials. That appears to be the case between Plaskett and Interior Secretary Ryan Zinke.

Plaskett spokesman Richard Motta says the two officials stay in touch, but he could not say if the shift in NPS authority was one of the topics. “I know that they’ve met numerous times in the past,” Motta said, “I cannot say if anything with regard to this was discussed.”

Efforts to speak to Plaskett July 18 were unsuccessful But in a followup statement July 20, Plaskett suggested the change may be of some benefit and not a loss of local control.

“There will be no changes to the parks’ names or legal authorities. The superintendents of each Caribbean park (St. Croix, St. John and San Juan) will now report to a group superintendent stationed in the Caribbean. I understand this adjustment will push decision-making closer to the field. We have received numerous reports from residents, National Park employees and other stakeholders concerning the relationship with the Virgin Islands National Park system and its community. We are supportive of changes which bring accountability closer to the people of the Virgin Islands,” Plaskett said.

“It is my understanding that recent management review of all National parks was completed in 2017. The review team found that each of the parks could be run more effectively by sharing resources and expertise. I further understand that the decision to realign was based on feedback received from management, employees and stakeholders at each park during the review. This change realigns the reporting structure of the three park managers. Three park managers — located at St. Croix, St. John and San Juan — now report to the Caribbean Parks Superintendent. It is my understanding that one of the Virgin Islands’ park managers was first offered the position and declined and as the second person offered was the San Juan manager. The San Juan park manager position is currently vacant. The three park managers will report to a Caribbean Parks Superintendent, and that superintendent reports to the Regional Director. The realignment mirrors similar models in the National Park Service, like the Outer Banks Group and National Parks of New York Harbor,” she continued.

Editor’s Note: This story has been updated to clarify that park officials and Delegate to Congress Stacey Plaskett assert that the change will not affect local control but instead places a Caribbean authority with between the local parks and the regional Park Service authority. It now includes new, detailed comments from Plaskett.

“Light Dem Up: Festival of Trees” Shines a Light on a Celebration of Culture