James Gardner - June 18, 2019
'We have to conduct ourselves in such a way that we deserve the dignity and respect of each and every person in this community,' Lt. Gov. Tregenza Roach said at Monday's swearing in ceremony for 12 cabinet officers.

Bill Kossler - June 18, 2019
A homophobic death threat on a social media account of someone who claims to work for the V.I. Police Department raised questions for government officials.

Use it or Lose it: Without Extension, Territory Risks Hundreds of Millions in Fed Funding

Wyndi Ambrose - June 17, 2019
Federal aid is pouring into the territory in billions, but the challenge is tapping into all of it before time runs out and the feds snatch the money back, Gov. Albert Bryan said Friday. Time is almost up on about $260 million awarded to the Virgin Islands through the Affordable Care Act.

Wyndi Ambrose - June 16, 2019
Fewer government employees won’t necessarily shrink the dollars headed towards the government’s pension system, Gov. Albert Bryan said Friday during a news conference in which he also discussed openings at the top of the V.I. Port Authority and the West Indian Co., Ltd.

Don Buchanan - June 13, 2019
In a confirmation hearing Thursday, Daryl Jaschen, nominated to direct the V. I. Territorial Emergency Management Agency, said there are deficiencies in the stocking of FEMA warehouses in the territory.

Marriott Offers Increase in Employee Mandate for Extension of Incentives

Bethaney Lee - June 12, 2019
Marriott Ownership Resorts Inc., a subsidiary company of Marriott Vacation Club International, requested an extension of benefits and modifications be made to its application during a meeting with the Virgin Islands Economic Development Commission. 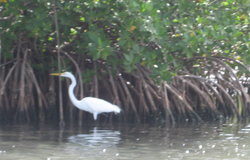 Source staff - June 7, 2019
Gov. Albert Bryan Jr. discussed upgrading the Visitor’s Center at Salt River National Park during a meeting at Government House Wednesday with Assistant Secretary of Insular Affairs Douglas Domenech and National Park Service Deputy Director Dan Smith. In a statement, Bryan said he is reviewing an agreement between the Government of the Virgin Islands and the National Park Service for construction of a new Visitor’s Center, which Smith characterized as “world class,” at Salt River Bay National Historical Park and Ecological Preserve. Domenech said the agreement would create a joint venture between the National Park Service and the Government of the Virgin Islands. Art and artifacts that had been kept at Salt River before the hurricanes would be returned to the new facility. There currently is a small collection of art and artifacts on display at Fort Christiansvaern, and others are under the care of the Danish Government until the Salt River Project is complete. “Salt River could be one of the most significant historical places in America,” Domenech said. During the meeting, Bryan also asked for any assistance the Office of Insular Affairs and the National Park Service could offer to provide more opportunities to enable children in the territory to visit Buck Island Reef National Monument. “I would really like some support around getting more kids to the monument, getting kids to the water and learning about the Buck Island Monuments,” he said. “These things are huge parts of our economy, our eco-culture, and we’re not utilizing them as well as we could.” Salt River Bay National Historical Park and Ecological Preserve documents the human and natural Caribbean world from the earliest indigenous settlements in the central Caribbean to their clash with seven different colonial European powers to the present day. Congress created Salt River Bay National Historic Park and Ecological Preserve in 1992 as part of the National Park System to preserve, protect and tell the story of its rich contributions to the nation’s natural and cultural heritage. The 1,015-acre park is jointly managed by the National Park Service and the Government of the Virgin Islands. Almost 32,000 people have visited Salt Bay since 2016 Bryan also accepted $3.4 million in federal funding during the meeting. Grants totaling $1,472,580 come from the Office of Insular Affairs Technical Assistance Program and its Maintenance Assistance Program. And the federal agency awarded $1,864,000 for capital improvement project funding. “These grants fund critical programs in the territory and help augment general fund expenditures, and we are grateful for the continued support of our federal partners,” Bryan said in a statement. “Our administration is committed to improving the government of the Virgin Islands’ grant management process to ensure timely application, delivery, and use of all federal grant funding," he continued. The TAP and MAP grants come out of the Office of Insular Affairs first round of Fiscal Year 2019 determinations, and further grant reviews will be conducted in the summer. According to the award letter Domenech presented to Bryan Wednesday morning, the funding breaks down as follows: Technical Assistance Program -- $270,000 to the Department of Planning and Natural Resources for its DPNR E-Permitting System project, as detailed in a proposal submitted March 1, 2019. -- $500,000 to the Office of Management and Budget for the Reconciliation of the Schedule of Expenditures of Federal Awards project, as detailed in the proposal submitted Feb. 21, 2019. -- $100,000 to DPNR’s Division of Libraries, Archives and Museums for the ADA Awareness Campaign and the Mentorship Program Campaign for Artisans/ Persons Seeking Museum Careers/Opportunities, as detailed in the proposal submitted March 1, 2019. -- $100,000 to the V.I. Economic Development Authority for the Rejuvenation of Heritage Properties for the Arts project, as detailed in the proposal submitted May 1, 2019. Maintenance Assistance Program -- $300,000 to DPNR’s Division of Libraries, Archives and Museums for Maintenance of AC Units and Generators and Training for Maintenance Staff, as detailed in the proposal submitted March 1, 2019. -- $202,580 to Ivanna Eudora Kean High School’s JROTC Department for the JROTC Drill Pad Covering project, as detailed in the proposal submitted May 21, 2019. Capital Improvement Projects -- $996,265 for the Frederiksted Road Rehabilitation project. -- $323,250 for the Charlotte Amalie Road Rehabilitation project. -- $544,485 for the Cruz Bay and Coral Bay Road Rehabilitation project.