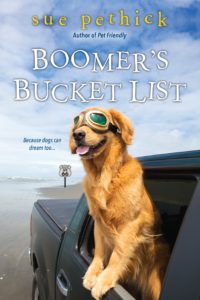 You always wanted to jump from an airplane. It’s something you dreamed about doing, just as you’ve always dreamed of walking the Appalachian Trail, seeing the Great Pyramids and visiting China.

So will you take the leap and fulfill your lifelong wishes someday or, as in “Boomer’s Bucket List” by Sue Pethick, will time and patience run out first?

She didn’t choose him. It was the other way around.

That’s what Jennifer Westbrook always recalled about the day she saw the squirming litter of Golden Labs for sale. Each of the puppies was adorable and choosing was impossible, but when the seller suggested patience, Boomer picked Jennifer.

He was her best friend, her roommate and she adored him, so when Jennifer learned that 5-year-old Boomer had a fatal illness and that he had just a month to live, she was heartsick. She instantly knew that she needed to make every moment count for her dog, so she told her boss that she was taking a month-long vacation.

Jennifer was taking Boomer on a road trip.

Once upon a time, Nathan Koslow was Chicago’s most-read newspaper columnist. That was before budget cuts and downsizing, before Nate lost his beat, and before he’d take any job his editor tossed his way. Desperate for an assignment, in fact, he agreed to fold a brotherly favor into a feature story on U.S. Route 66 and, along the journey, Nate met Jennifer.

He liked her instantly, but he always said the wrong things and she was prickly. Boomer seemed to love Nate, but Nate wasn’t sure about Jennifer…

When the favor for his brother fell apart, Nate was surprised, then, that Jennifer invited him along on Boomer’s road trip. Both were surprised that strangers were so very helpful; people everywhere went out of their way to pet and talk to Boomer, which didn’t make sense.

And then Jennifer learned about a website, and a contest, expensive prizes, and her PR firm all over it. She was angry – how dare they benefit from her private pain? And it got worse when she learned that Nate was somehow involved.

Jennifer wanted to finish the trip without Nate – but what would Boomer want?

Ah, but then a sidestory that author Sue Pethick throws in – the one that seemed out-of-place at first – changes everything: the whole tale’s tone, its pace, and even the path it seemed to be on. That sidestory perfectly tosses the predictability aside which makes this entire book a lot more fun to read, even though we sense that happily-ever-after will contain a very sad note.

If you want something squeaky-clean to share with any teen or adult you know, this is it. No profanity, no steamy scenes, no problems – just a nice romance with a few curves. That’s “Boomer’s Bucket List,” so jump on it.