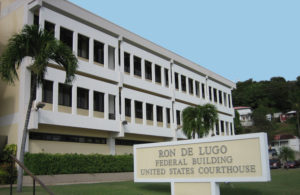 Details of an investigation by Coast Guard officials into the death of a sailboat crewman surfaced this week as a lawyer representing the captain in federal court prepares for a hearing next week. Capt. Richard Smith, owner and operator of the S/V Cimarron, is charged with seaman manslaughter.

The federal manslaughter charges are connected to an October 2015 incident in which crew member David Pontius jumped overboard after an altercation with Smith. The sailboat captain was indicted in July on felony charges but charging documents were made public earlier this month. A federal magistrate recently rejected a motion by prosecutors to detain Smith, pending trial.

At the end of the report submitted on Wednesday, Hopper concluded that Pontius was physically challenged by health problems, made worse by the onset of sea sickness shortly after the Cimarron set sail for St. John from North Carolina. As the ailment worsened, it became difficult for Pontius to take prescription medications found among his personal effects, Hopper said.

“I believe that David’s medical condition made him a high risk along without the complication of being seasick. He did not make a good choice to sail several hundred miles offshore with help so far away,” Hopper said.

Investigators said that a combination of events led the crewman into a disoriented state and agitation. Eyewitness accounts provided details about the ailing crewman’s behavior on board the Cimarron between Oct. 21 until he jumped over the side on Oct. 25.

But those accounts differed among crew members. Hopper said all three people on the sailboat agreed with an account of illness and deterioration of Pontius’ emotional state.

After that, versions of the story begin to change, and the changes speak to some of the specific charges Smith faces in court. A grand jury indictment alleged failure to take required precaution; failure to stop and render assistance; failure to deploy a search and recovery pattern after Pontius went overboard; failure to mark the location where the crew member left the vessel and failure to make proper use of the marine radio on board.

All three witnesses said Pontius fell ill within a few hours of setting sail; that he initially refused a patch offered for relief; that the crewman became disoriented and began to hallucinate.

By Oct. 25, they said, the situation worsened, leading to an altercation between Pontius and Smith. Shortly afterward, witnesses said the crewman jumped overboard.

Pontius was not seen again. Three witnesses, at this point, told the Coast Guard different things.

One said they saw a line of bubbles rising from the sea where Pontius disappeared. Another said they asked the captain if he would go back and look for the crewman, to no avail.

The third witness told investigators the altercation took place a few minutes after the captain and crew member argued over the handling of a spotlight, followed by a threat from Smith. When Pontius went overboard, that witness said the seas were too rough to see bubbles.

Defense attorney Michael Sheesley declined comment on Hopper’s report but said the record spoke for itself.

“I don’t have a comment on it but those documents are attached to a public record,” Sheesley said.

Editor’s note: This has been changes to correct the name of the defense attorney. His name is Michael Sheesley.

Potholes, litter, derelict cars, clogged guts, traffic lights – these are just a few of the things the territory’s island administrators deal with daily as the de facto mayors of the Virgin Islands.
Read more
Local news

V.I. Department of Justice officials recently told a federal judge they have recovered from a 2019 ransomware attack and a computer virus infection that wiped out its electronic records system.
Read more
Local news

In a unanimous decision, the St. John Committee of Coastal Zone Management voted to disapprove an application by Cowgirl Bebop LLLP to permit a 120-foot floating lounge and restaurant off Mingo Cay in Pillsbury Sound between St. Thomas and St. John.
Read more

Raising the issue of who is a native Virgin Islander is certain to be a controversial one. If it is undertaken by someone not even born in the islands, it can be dismissed on that basis alone. For that reason, a draft of this column was circulated to highly respected members of the community who have deep ancestral roots here and possess an informed knowledge of the subject. The questions posed were: Is the language offensive or insensitive? Is it factually accurate? Is the analysis sound? No objections were received. Indeed, publication was encouraged. #visource #usvi #editorial ... See MoreSee Less

Op-Ed: Who Is a Native Virgin Islander? | St. Thomas Source

Paul Leary parses the meanings of native, aboriginal, native and indigenous in search of a definition of who is a native Virgin Islander. Does it even matter who is a "native"?
View on Facebook
·Share

Frankly, I would like UVI or the convention to enlist the services of an anthropologist to craft and polish the definition of who is a Virgin Islander for the sake of identity. I personally get offended by a dismissive disposition when the identity of a people, my people, my ancestors has been degraded over time, after the slave ships disembarked their "cargo" to sell on the auction blocks. For me, I've been fortunate to trace my bloodline to the 1830's in the VI on both sides of my family. After that, I have roll up my sleeves to really get back to tribal ties to mother Africa. But thanks to African Ancestry, I may be able to trace my lineage, but through DNA, not family name. The family ties to mother Africa will require more leg work. The constant push back from the African descendants in the VI to forge an established identity in the new world, one they had no choice but to make a home through "blood, revolt and fire," will continue to be a source of agnst until there's an identity in the law.

When you make a business call and are upright and professional and the person on the other end does not think you are a Native Virgin Islander and starts bashing the people you love and who made you who you are, it’s kinda hard to “get over it” and “move on” despite all your love and good intentions for people who share your island.

There is a need for a Local Citizenship for Native/Indigenous Virgin Islanders who, as a consequence of and lack of control over US immigration policies, have been made "aliens" in their own land. To simply expect them to "get over it" as Dr. Leary suggests is insensitive and insufficient. Indigenous Virgin Islanders are not even considered "birthright US citizens"--consigning them to a status of "neither fish nor foul." As a consequence of which there is a severe identity crisis amongst the populace.