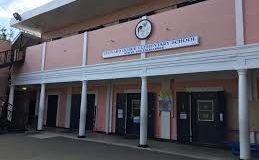 Susan Ellis - May 29, 2019
After learning earlier this month about two school closings and other changes on St. Croix, St. Thomians learned about changes in their public schools recently – although the news has not been conveyed publicly by the V.I. Education Department.

Source staff - May 28, 2019
The tourism industry in the U.S. Virgin Islands is robust, Gov. Bryan told attendees at the Caribbean Hotel and Resort Investment Summit in Miami Beach on Tuesday, adding that now is the time for investors to take advantage.

Bernetia Akin - May 28, 2019
Faye John-Baptiste, RN, and Dr. Olivine Treasure both remember 1999 as the turn-around year for St. Croix families. That summer, the Juan F. Luis Hospital welcomed a neonatologist to its staff, and things began to change fast, contributing to what is one of the big success stories in V.I. health care.

Source Staff - May 27, 2019
The competition provided an opportunity for high school seniors in the territory to vie for scholarship prizes by presenting oral arguments in which they analyzed relevant legal issues in a mock appellate court proceeding before actual Virgin Islands judges.

Memorial Day – A Time to Remember

Denise Lenhardt-Benoit - May 27, 2019
At the far edge of downtown Frederiksted, at the very end of King Street, lies the Tail End Bar, Restaurant, and Courtyard, where owner Christopher Samuel opened it three years ago in the former Harbor Lights.

Source staff - May 25, 2019
Two 28-year-old St. Croix men were killed Friday evening in a fatal traffic accident near the Lime Tree Refinery on St. Croix, the V.I. Police reported. Next of kin identified the driver of the vehicle as Bernard Matthew and the passenger as Derrick Liburd, both 28.

Gov. Bryan: One-Time Medicaid Windfall Should Not Go to Raises

Source staff - May 23, 2019
Gov. Albert Bryan urged the Legislature in a statement Thursday not to spend any of a one-time $39 million Medicaid reimbursement windfall on recurring expenses like pay raises but instead use it for the hospitals' utility bills.

Bethaney Lee - May 23, 2019
A new phone application named Caricab has been launched for V.I. residents, the first of its kind, creating communication between the 3,000 taxicab owners licensed by the V.I. Taxi Commission and those on island looking for a ride.

Susan Ellis - May 23, 2019
Building on a vision of acceptance and empowerment, the activities planned by St. Croix Pride throughout June offer something for everyone – Virgin Islanders and the LGBTQ+ community, organizers say.
1...101112Page 11 of 12