His master told him to wait by the cathedral steps.

And so he did, for 225 years, since they day they were separated by a crowd inside that stone building.

In his new novel, “Tomorrow,” Damian Dibben lets the dog narate the story, and this is an animal you wish was your own.

After his master disappears, the dog slept nearby, waiting, in case there was one molecule of smell from the man he loved – but there was nothing.

Once, they lived in a palace and life was an adventure.

His master had been a chemyst who could cure anything and his potions were known throughout the land, but few noticed that he never aged. Indeed, because of a powder his master created and the crescent-shaped belly scar they shared, they’d seen many centuries together, good times and bad, love, pain, and death. He thought about those times as he waited on the cathedral steps, until the day he caught a scent that made him think his master was near. 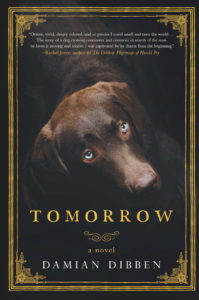 Instead, it was the man named Vilder, a colleague of his master’s who’d caused much anguish. He was never sure if Vilder was benign or cruel, threatening or cajoling; Vilder interested him, and frightened him, both. He’d seen Vilder tender with his lover, a soldier; and he’d seen Vilder in a rage. He’d smelled danger then.

He smelled it again now, and though he had friends in the city and he’d been told to wait, he had to follow their enemy. He had to see if Vilder might lead him to a reunion.

Vilder, as he knew, could be the last link to his master.

The very first thing you’ll notice, as you start “Tomorrow,” is how the dog-narrator’s voice sounds inside your head. It’s got strength and intelligence, it’s keenly emotional, and it’s there immediately.

From that surprising beginning, author Dibben takes readers on a tour spanning more than two centuries in a dazzling story that’s rich with details. The language is perfect, the scenarios lend a whiff of magic, there’s chance to shed a tear or two, and the history is dead-on. It’s fantasy without being fantastical – and yet, that’s still not the main appeal of this book.

What will pull readers in and keep them there is the narrator himself, a dog whose name we don’t learn until the end of the tale. You’ll think of your own pooch as you read this story of faithfulness and friendship, loss, hope and despair. You’ll understand its urgency, and you’ll turn pages like mad.

Because of its dark fairy-tale tone, this book won’t appeal to everyone. Even so, if you loved Umberto Eco, James Owen, or tales of palace intrigue, war, and danger, you’ll love “Tomorrow,” without a shadow of a doubt.

Terri Schlichenmeyer is “The Bookworm.” Terri has been reading since she was three years old and never goes anywhere without a book. Her self-syndicated book reviews appear in more than 260 newspapers.