“The goal of these two joint initiatives is to start a coordinated national conversation about domestic violence and how we can all contribute to changing the narrative on this overshadowed, but fundamental topic, then build on that conversation to raise awareness, increase donations and volunteer efforts, and deepen community engagement by connecting our work nationwide,” the Women’s Coalition of St. Croix stated in a press release announcing a schedule of events to commemorate the month.

According to the coalition, domestic violence is more prevalent than most realize: nationally, an average of three women are killed by a current or former intimate partner every day. Children exposed to violence are more likely to attempt suicide, abuse drugs and alcohol, run away from home, become victims of trafficking, and commit sexual assault crimes, it said, citing a study by the National Network to End Domestic Violence.

Anyone, regardless of gender, race, sexual identity or orientation, or socio-economic status, can become a victim of domestic violence, the release noted. “This year’s campaign theme, #Every1KnowsSome1, strives to highlight how common domestic violence is and that it is more than physical violence,” it said.

WCSC’s advocacy, programs and services have been available on St. Croix for over 41 years. In the first six months of this year alone, the nonprofit has assisted 405 persons experiencing domestic violence.

Throughout October and November, WCSC and NNEDV will be sharing content on their social media channels to help raise awareness and educate the public on the complex dynamics of domestic violence, the release stated. WCSC and their community partners on St. Croix and St. Thomas will host local, education, prevention and awareness events around DV for the month of October. NNEDV’s annual “Week of Action” is planned for Oct. 17 through 23, designed to engage advocates, partners, and the public in starting a national conversation.

There will also be two official GiveForDV Giving Days — one during the DVAM Week of Action on Oct. 19, and one on GivingTuesday, Nov. 29. Supporters can get involved by finding their state coalition and local program at https://givefordv.nnedv.org/

Free and confidential help is available 24/7 for individuals experiencing domestic violence. Those seeking help may contact the National Domestic Violence Hotline at TheHotline.org or 1-800-799-SAFE (7233) or WCSC on St. Croix, at 340-773-9272.

The Women’s Coalition of St. Croix is a 501c3 nonprofit organization providing advocacy, programs and services to people impacted by violence and families in need, especially victims/survivors of domestic and sexual violence. Visit wcstx.org for more information. Follow WCSC on Facebook and Twitter @wcstx; on Instagram @wcstxvi; and on YouTube at youtube.com/wcstx.

Following is a calendar of events the Women’s Coalition of St. Croix is hosting to mark Domestic Violence Awareness Month: 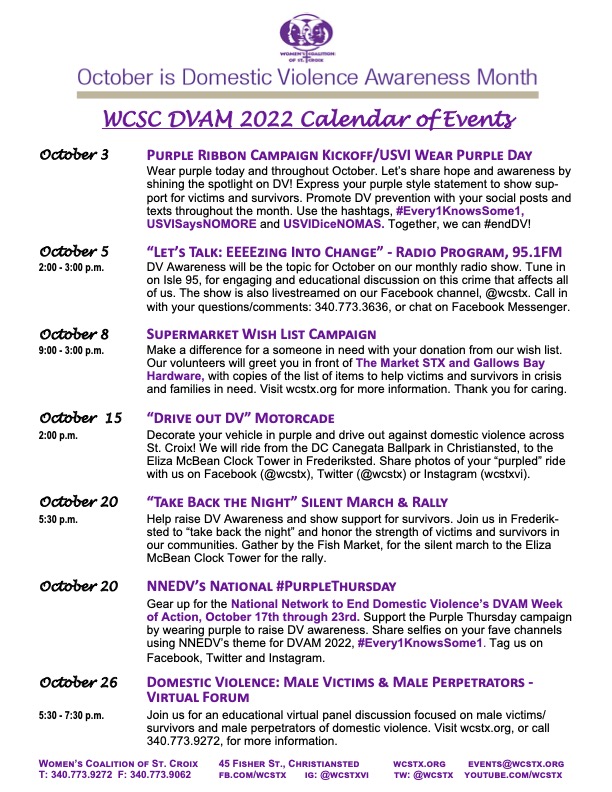 Keeping our community informed is our top priority.
If you have a news tip to share, please call or text us at 340-228-8784.
Facebook
Twitter
Pinterest
Email
Previous articleStephen Swanton and Esther Ellis Win First Triathlon of the Season
Next articleMotorcycle Rider Dies in Collision on St. Thomas

Hospital Board Spotlights Progress in Capital Projects and Construction