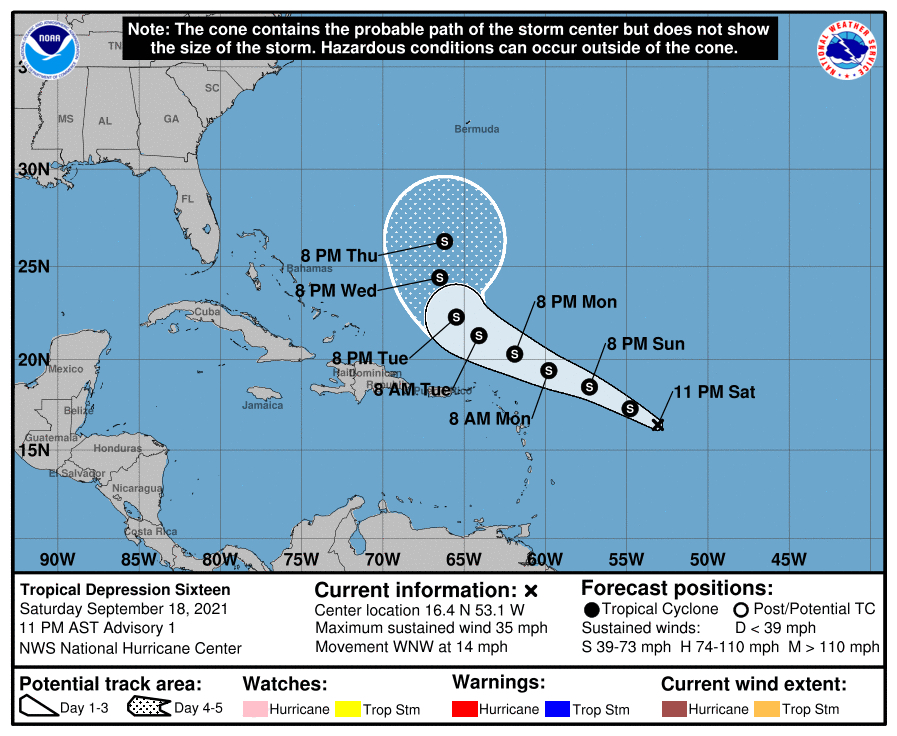 A weather system meteorologists have been tracking since it left the coast of Africa early last week developed into Tropical Depression 16 Friday night and, while no coastal watches or warnings are in effect for the Virgin Islands, Puerto Rico or the northern Leeward Islands, it may still impact the islands as it passes to the north on Monday or Tuesday.

According to the National Hurricane Center’s 11 p.m. Friday update, the center of Tropical Depression 16 was near latitude 16.4 north, longitude 53.1 west. The depression was moving toward the west-northwest at about 14 mph, and this motion is expected to continue during the next few days.

On the forecast track, the depression is expected to pass to the north of the northern Leeward Islands on Monday and Tuesday, the NHC said.

Maximum sustained winds are near 35 mph with higher gusts. Some strengthening is forecast, and the depression is expected to become a tropical storm on Sunday, the forecasters predicted.

The outer bands of the depression could produce rainfall totals of one to three inches across portions of the northern Leeward Islands, including the Virgin Islands and Puerto Rico later Sunday through Tuesday. This rainfall may lead to areas of urban and small stream flooding.

Swells generated by the depression are expected to reach the northern Leeward Islands Sunday night and Monday. These swells could cause life-threatening surf and rip current conditions.

WITH AN EXTREMELY LIGHT SENTENCES. THEY TALK? OBVIOUSLY!👽