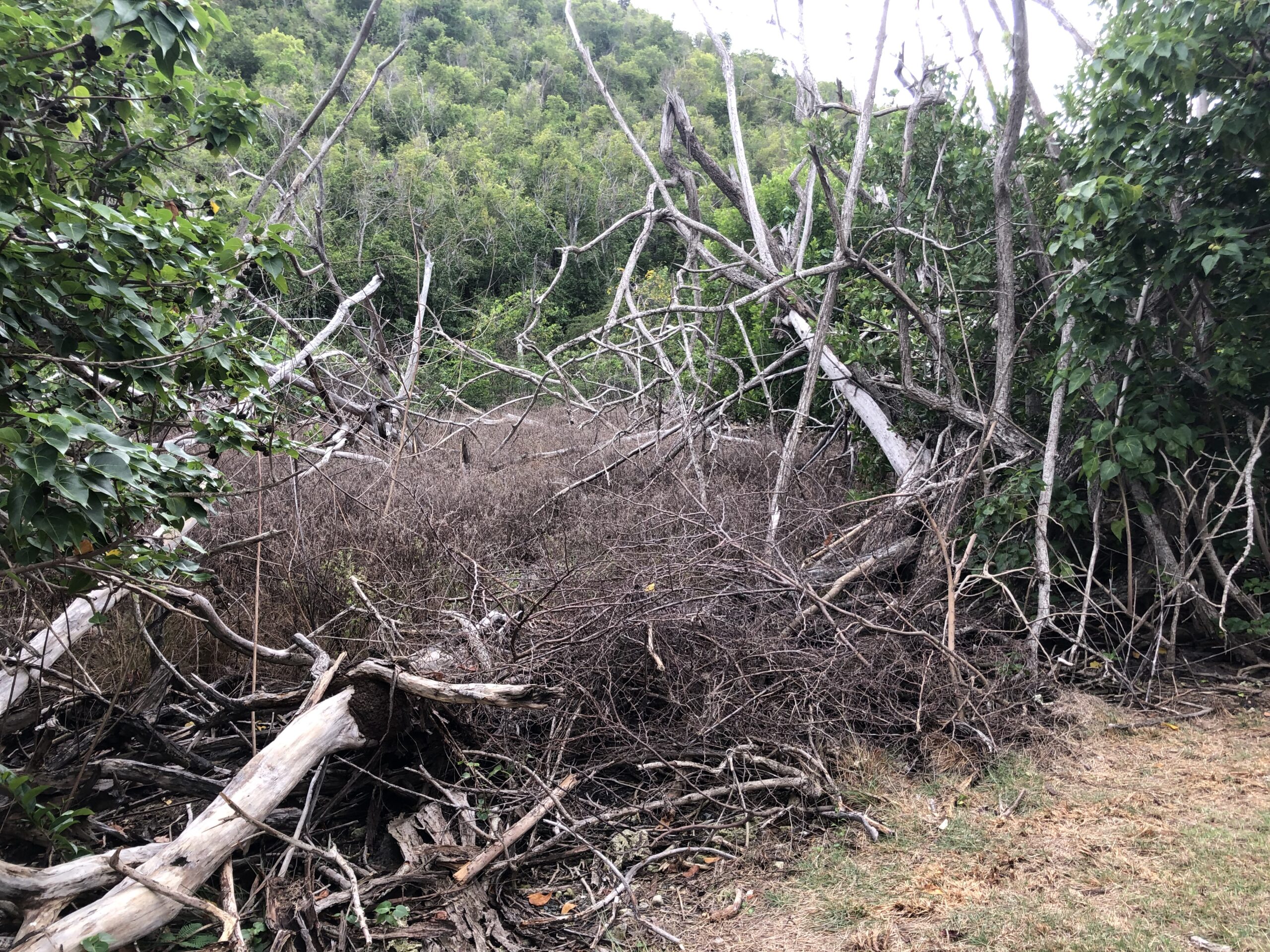 One of the largest red mangrove wetlands on St. John, endangered since Hurricane Irma tore through the Virgin Islands in 2017, is about to get some help.

On April 7, the St. John Committee of Coastal Zone Management voted unanimously to approve a plan that will allow the National Park Service to rebuild the shoreline along the Annaberg Road, clean out culverts that have become clogged with storm debris, and plant mangrove and native species seedlings along the shores of Leinster Bay.

Park Service staff hope the project, first presented to the public at an online hearing in January, will do exactly what is needed to keep the mangroves alive and stabilize the shore.

Mangroves play a critical role in healthy ecosystems by serving as breeding areas for fish, shellfish and birds as well as forming a barrier to protect terrestrial habitats from storm surges while protecting marine life from terrestrial runoff.

It’s not only storms that have threatened the mangrove wetland. Human activity, including the construction of a paved road to Annaberg in the 1960s, has changed the landscape in this area which contains extensive ruins from sugar production centuries ago.

The Annaberg Road provides easy access to the popular ruins, but it also separates the mangrove wetland from Leinster Bay, disturbing the natural drainage pattern between the wetland and the sea. Years ago, to promote better drainage, four culverts were installed under the road bed.

These culverts became clogged with storm debris in 2017 when the surge from hurricanes sent waves crashing over the road and into the wetland.

Passersby may think the mangroves have grown back because they’ve seen a healthy “wall” of vegetation flourish along the roadside next to the wetland; although this vegetation is pleasing to the eye, most of it is not endangered red mangrove.

Many of the 70 species of mangroves throughout the world are now threatened. As far back as 2007, concerned scientists noted, “The Caribbean region has the second-highest mangrove area loss relative to other global regions, with approximately 24 percent of mangrove area lost over the past quarter-century,” according to the Environmental Law Alliance Worldwide.

With the approval of the STJ-Coastal Zone Management Committee, the National Park Service can now begin the process of restoring the shoreline.

In addition to cleaning out the culverts, contractors will regrade drainage ditches, install 60 feet of riprap along the shoreline, and repair the turn-around area at the end of the paved road.

As a result of storm surge, there is now a nearly two-foot drop off from where the road ends and the trail to Waterlemon Bay begins. (It’s worth noting that the popular trail was a driveable road until Hurricane Luis washed most of it away in 1995.)

In addition to repairing the road, the Park Service now has permission to plant red, black and white mangrove seedlings and other native species throughout the area.
More than 1,500 seedlings are being grown by Iowa State University, according to Thomas Kelley, natural resource manager for the Virgin Islands National Park. Half of these will be planted in the fall of 2022, and the other half in 2023, Kelley said.

Kelley said some of the seedlings will be protected by fencing for up to two years to prevent them from being eaten by deer. “We’re hoping for high survivability,” he said.