During a robust daylong session with a packed agenda, the U.S. Virgin Islands Senate, meeting as the Committee of the Whole, voted to pass two board nominations, two lease agreements, six rezoning requests, four coastal zone management requests and 12 additional bills. All bills will now be forwarded to Gov. Albert Bryan Jr. for final approval.

Though a few pieces of legislation were discussed briefly during Monday’s nine-hour hearing, more robust discussions had taken place in prior committee hearings, leaving little more to talk about.

The following bills were approved by the Legislature during Monday’s session, and what they will do if signed by the governor. Links have been provided for some measures passed during Monday’s committee hearing.

– Bill No. 33-0054 aims to remove barriers faced by minority and women-owned businesses that would like to participate in bidding on government contracts.

– Bill No. 33-0077 will require people found guilty of financially taking advantage of an elderly individual to make restitution.

– Bill No. 33-0275 appropriates $8.2 million from the Internal Revenue Matching Fund for the continued construction of the Paul E. Joseph Stadium on St. Croix.

– Bill No. 33-0324 grants the request of Gov. Albert Bryan Jr. for a $60 million revenue-anticipation note to fund governmental operations and alleviate revenue losses brought about by the pandemic.

– Bill No. 33-0217 will allow the Department of Property and Procurement, in conjunction with additional agencies, to create public restrooms in Charlotte Amalie by refurbishing the building at No. 1 Norre Gade.

– Bill No. 33-0329 ratifies various health insurance coverage between the Government of the Virgin Islands and Life Insurance Company of North America, also known as CIGNA.

– Bill No. 33-0335 will restructure the Cannabis Advisory Board, which calls for 11 individuals of varying professional expertise to be contained within the board.

– Bill No. 33-0106 will prohibit certain uses of drones and other unmanned aircrafts.

– Bill No. 33-0338 requires the Government Employees’ Board of Trustees to obtain approval from the Legislature for any policies that impact government employees.

– Bill No. 33-0339 is sponsored by Sen. Myron Jackson and speaks to a referendum to convene a constitutional convention that will correct an omission in the ballot question.

– Bill No. 33-0341 authorizes administrative leave for first responders during a pandemic or state of emergency.

Coastal Zone Management Permits
– Bill No. 33-0307 allows for a permit to be issued for the installation of eight moorings for a floating water park and Jet Ski channel.

– Bill No. 33-0337 allows for a permit granting Kings Alley Management, Inc. to replace the wooden decking on the 99-foot long by 10-foot wide approach bridge, the dock will occupy 3,850 square feet of submerged land.

– Bill No. 33-0308 provides a permit to Pleasant Properties, LLC for the construction of a 475 square foot dock and the installation of five moorings located in Estate Smith Bay on St. Thomas.

– Bill No. 33-0336 allows a permit to be issued to Donald Sussman, a permit already approved by the governor.

Rezoning Requests
– Bill No. 33-0333 grants a conditional zoning use variance to Parcel No. 6D Estate Adrian, No. 18 Cruz Bay Quarter on St. John, which will rezone the property to allow for a restaurant, bar and retail businesses.

– Bill No. 33-0320 to rezone Parcel No. 5 Estate Honduras, No. 8C Southside Quarter on St. Thomas from residential-medium density to special.

– Bill No. 33-0321 to rezone Parcel No. 38 Estate Donoe, 2A New Quarter on St. Thomas from residential-low density-one and two family to residential-medium density.

– Bill No. 33-0323 to conditionally rezoning Plot No. 94-F Estate Diamond, Queen Quarter on St. Croix from residential-low density-one and two family to business-scattered.

– Bill No. 33-0332 speaks to the rezoning of Parcel Nos. 34B and 34 Remainder Estate Freeman’s Ground, No. 8A Coral Bay Quarter on St. John. The properties would be rezoned from residential-low density-one and two family to business-scattered.

Board Nominations
– The Legislature approved Positive Nelson’s nomination to sit on the Cannabis Advisory Board.

– The Legislature approved Lois Hassel-Habtes’ nomination to serve on the University of the Virgin Islands Board of Trustees.

Lease Agreements
– Bill No. 33-0327 approving the lease agreement between the Government of the Virgin Islands and Marco St. Croix, Inc. for Plot No. 182 Estate Anna’s Hope, Company Quarter.

– Bill No. 33-0328 approving the lease agreement between the Government of the Virgin Islands and Alliance Data Services LLC for Building No. 1, Section B, Plot No. 6 Estate Recovery Hill, Company Quarter on St. Croix. 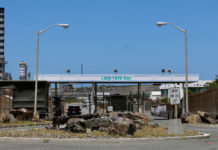